When last I updated you on Glenmutchkin, we were making the legs.  These have been reassembled and look like this: 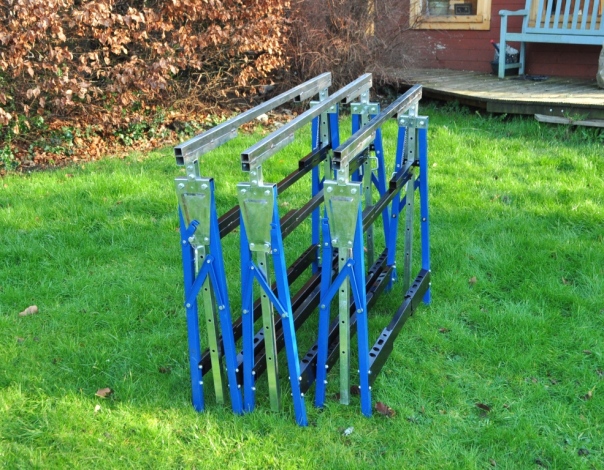 They are not yet finished as I wish to make a mount for the support girders; so it will soon be time to prevail on my brother again!!  However, I have been tinkering with plans and have come up with the baseboard layout and a rather tidier rendition of the basic plan:

A little unusually, I am making the layout two boards deep as I am trying to get a lot of “depth of field” in the model.  Portchullin works very well in this regard to the right side where there is a bank and you do not see the back of the layout but less so in the station building area or across the bridge.  The depth of field is intended to try and overcome this but I will be having quite high hillsides behind again for much the same reason.

I am hoping that I have been able to book a bit of time in some friend’s joinery shop this week to make a start on the building of these.  Five of the boards are relatively simple; the last two (nos 3 & 7) a lot less so.  One of the chief areas that Portchullin lets itself down on is the quality of the baseboards – compensation/springing is a must on steam locos for example!  My friends (Tim & Julian) pointed this out with some vigour and told me that they really knew being joiners…………well you can see where that led for the next layout!

Every favour has a price though; so I am down to build something in return for them!