A mere three weeks ago, but a lifetime in the past now that we are in the middle (or more worryingly, perhaps just the beginning) of the Covid-19 crisis, I was a demonstrator at the joint EMGS/Scalefour Society skills day.   These skills days are not really exhibitions and are instead aimed at passing some skills on to the visitors – thus they are primarily a hall full of demonstrators with only the odd layout or two to break up the rows of desks.

Here I am, in a shockingly creased shirt (!), and as you can see, I am demonstrating signal construction.  I am pleased to say that at the skills day I had a solid stream of people engaging with the topic all day; so much show I had to pull down the shutters for a brief lunch as otherwise I really would not have stopped all day!

By way of preparation for the event, I thought about what I have learnt about building signals and distilled a list of my top tips.  These proved to be the cornerstone of my conversations with people at the Skills Day so I thought it was worth repeating them here on the blog. 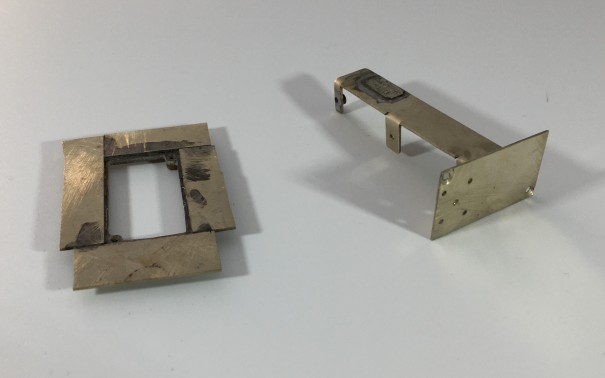 The base and mount for a two movement servo controlled signal

A flat etched ladder with 0.3mm wire being soldered to the stringer

Dimensions were not standardised even within a company, let alone between, so offering directions on dimensions is dangerous – all I will say is these dimensions are commonplace: