And now a Midland signal…..

Whilst the NER signal from my last post gets itself painted, I turned my attention to the next few signals – in this case these will be Midland lower quadrants.

A lot of the character of a signal is in its finial and if this isn’t right then the model won’t convince.  In addition, they are also very vulnerable so need to be durable.  Therefore, my conclusion is that white metal finials do not cut the mustard – they are too delicate and too clunky.  Thus, in this case I decided to make my own – I came up with this which starts with with some interlocking etches:

The Midland’s style of signals do have a few idiosyncrasies; one of which is the way that blinders are fixed.  Instead of being fixed to the spindle these are secured to the arms and wrap around the lamp.  This can be more clearly seen in the photograph below.

The other key change was in the manner in that the arms are secured to the posts.  Instead of being pined through the arm and secured at the rear, the Midland used a bracket to the front of the post with a plate that wrapped around to the front of the signal to support the arm to the front.  This can be seen in this view of a rather nice gallows signal at Butterley. 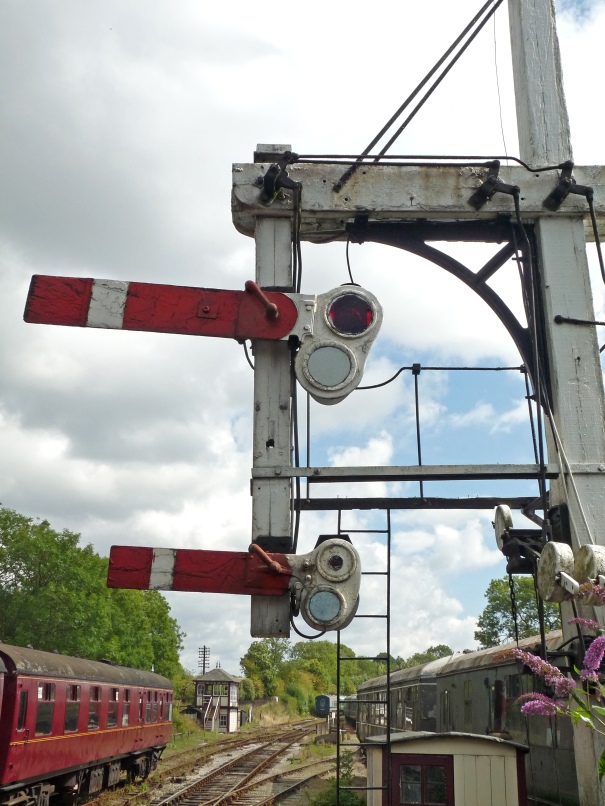 The bracket can be seen in this view below and I then created a pin that fitted into the bracket and slotted over the spindle.

I have bought a new light box for taking photographs in. Whilst I am still getting to grips with it, when it works it does produce much improved pictures of models. These almost look like an images of a 3D model on a computer screen.  The pliers at the bottom of these views do rather give the game away!

The Midland were a bit odd in their choice of colours for their signals. The posts were “primrose yellow” but this quickly dirtied to something akin to cotswold stone is what the book says, so this does give something a little different.  This is my representation of this with a decent dose of smokey dirt – when you look at contemporary photographs many signals were not only dirty but entirely smothered in smoke.  I haven’t gone that far yet, but its going to need to be done!

As can be seen, this still needs connecting to the servos and the touching in of the paint on the parts that I fit after the main assembly (the balance lever and the plate that wrapped around the signal arm).

Posted in Benfieldside, Workbench (other)