Whilst I seem to be known in the electronic ether for my 1970’s modelling, this is not really my main interest.

Many years ago, I set my main era as the early years of the LMS.  Whilst I do quite like some of the LMS standard classes, it was really the sight of the Edwardian and Victorian locomotives of the Highland in the lined red pulling a rake of fully lined coaches that seduced me.  After all; who could resist something like this: 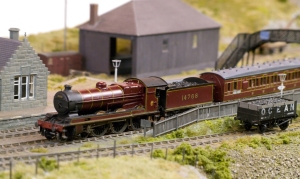 Its peculiar; I would think that the 1920’s is the least modelled era after about the 1880s?  Think about it, when did you last see a model from this era?

My regret for this period though is the loss of the red oxide painted goods stock.  The Highland often (apparently at random as to when they would and when not) pick out the ironwork of these in black and again I am drawn to the fusion of colour that occurred as a result.  To get over this contradiction; I model in about 1925/1926.  Much of the passenger stock and locos had by then been repainted in the new corporate LMS colours but at least some of the good stock remained in the old pregroup livery. 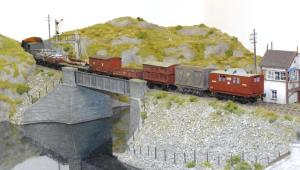 with thanks to Ray Nolton for two of the pictures