Just prior to Portchullin’s last two exhibitions, Tim of S&T Joinery brought around the last couple of boards so that all of the scenic boards are now back at home.  Obviously, this meant that we had to do a test erection! 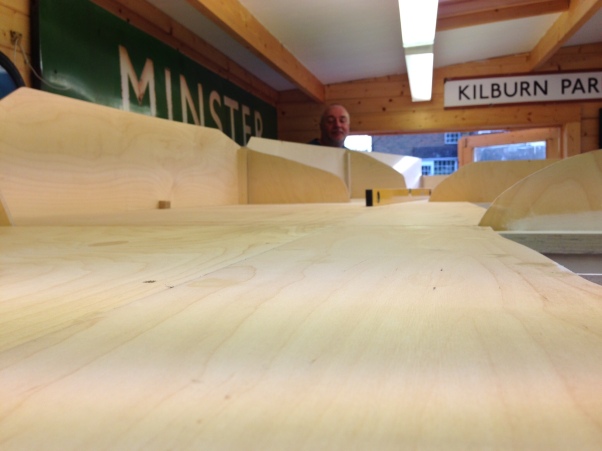 And very pleased I am too, especially with how flat they are.  A rear contrast to the rolling hills affect that I managed on Portchullin.  I am obviously hoping that this is going to result in much better and more reliable running.

The design of the leg and the supporting beams can now be seen more clearly.  it does take a bit of time to get these level (caused I believe by the absence of levelness in S&T’s workshops!  However, once the beams were level, it was a matter of moments to place the boards on them and connect them up.  So I think we will do some setting out at the weekend. 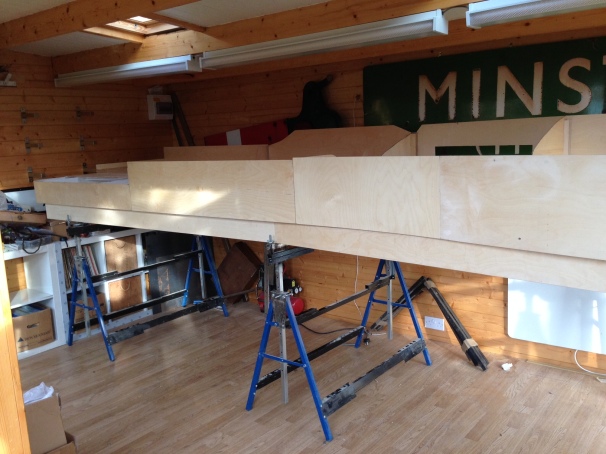 In some respects the photos don’t quite do justice to these boards and also how large they are collectively.  The width in the top view is 1200mm and overall the length of the boards together is 5250mm.  As will become apparent in future posts, I am going for the “railway in the landscape” feel and I don’t want it to fee cramped either.

And if anybody wants an electric loft ladder, this is where you go http://www.st-joinery.co.uk/