Missenden Adventure – Part 2 the Others!

Having warbled on a bit about what I had been doing at Missenden, I thought it might be of interest to show what other people were doing.

First up was Alan Edgar, who had not one, nor even two locos on show but three.  Worse than that, what I thought was the best one had been put to bed by the time I got my camera out!  So instead of a GNR(I) S class with full inside working motion, I only got a picture of its slightly smaller brother a GNR(I) Q class (I do hope I got this right, I am no expert on the Irish Railways!) with working inside valve gear.  Built to P4 standards but at the correct 5’3″ gauge for the Irish main lines and utterly exquisite it was too!  I can’t wait to see it in the pale GNR(I) blue – it will be head turner when it is finished.

Next was John McAleey with his Dave Bradwell A1 chassis to go under a model of Tornado, undergoing the latter stages of a fairly drawn out gestation.  Given that this is John’s third etched kit and is not, in his words, “a speedy one” – I’ll take my hat off to him for getting it so far and it is looking the part I am sure you will agree!

One of the pleasures of Missenden is that you meet people that you might not ordinarily encounter and to find out some of the amazing things that they are creating.  I always think the 2mm guys are a bit bonkers as they seek to make models that are 1/4 of the volume of my stuff – which in this case means scratchbuilding everything in these next two views of a Midland Spinner with the exception of the gear wheel.  Their creator, Gary Fletcher, is utilising etching, rapid prototyping, lost wax casting and good old fashioned scratchbuilding to get these.

Now if that is not bonkers enough for you, let me tell you he needs something like 30 of these (or its close sisters) as he has decided that as no one has tried to recreate an accurate model of a London mainline terminal before, he might as well have a crack.  However, if creating an accurate model of St Pancras is not enough, to ensure that it is difficult enough for him, he is setting this shortly after the turn of the last century with lots and lots of fully lined coaches and locos.

And he has already made some progress on the station, all created as a rapid prototype which he has had printed.  So, if they remake Harry Potter Gary, I’ll know where to send them!! 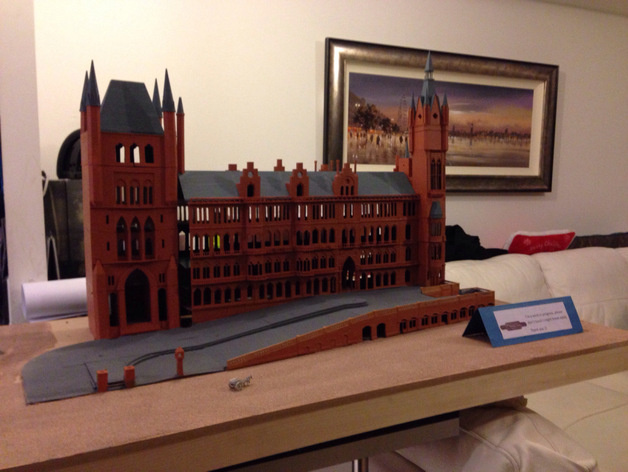 Incidently, to the left side of my blog here is a list of other blogs that I have found to be interesting.  There are quite a lot there, some being more active than other but as I have just added Gary’s it is at the top – so go and take a delve?