← Going Dutch – Two for the Price of One!
Sliding Axles – A Reprise →

Six wheeled coaches are pretty and they are quite characteristic on branch services on the Highland system in the early 1920’s.  The problem is that they are bu**ers to get to properly work because there is a tendency for the middle axle to rock on any raised sections of track or for it to fail to swing on curves.  OO modellers can typically get away with this as those deep flanges do come in handy for it.  P4 modellers, such as myself, have a tougher time of it and whilst I have built a couple of six wheeled coaches, the count that can master the trackwork of Portchullin is rather less than the number built!

Having got better over the years at getting things to run properly (still a work in progress mind…..) I have turned my attention again to some more six wheeled vehicles.  The first one to write about uses a less usual approach to accommodate curved/lumpy track – the use of a sliding axle.  Although this has been written up before, I have not seen it actually executed so maybe I am a first (or perhaps fairly near to the first to do so!)  Actually, I have found it pretty easy and the completed vehicle manages my test track with ease, so it will get an outing on the layout next week.

As I don’t have a lathe, creating the pin point axles is beyond me even though it would be a very simple bit of lathe work and this was one of the main stumbling blocks to trying this approach previously.  Then I had an inspiration…………Exactoscale axles.  These have a notional outside diameter of 1mm which I found to actually be about 0.96mm – even better as it is thus an easy fit to a 2mm brass tube with a 1mm bore!  Tube in this dimension is readily available and can be purchased from Eileens or your preferred metal stockist.  The first task is to remove the moulded plastic cosmetic inner axle which proved to be really easy as it came off very cleanly. 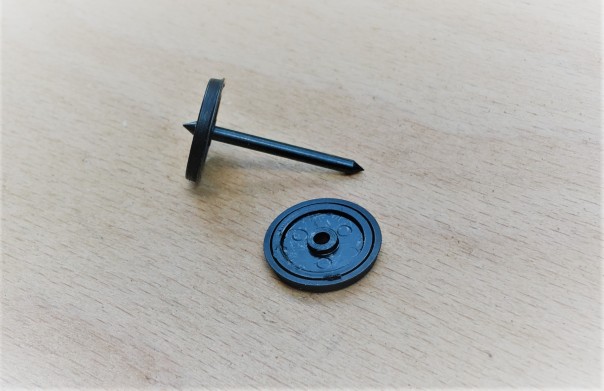 Alan Gibson wheels are structured around a 2mm axle (which again was actually fractionally below 2mm) and have a tendency to be a little loose, so popping them off was easy!

I cut the brass tube well over length and mounted it in the drill.  Prior to inserting it into the wheel I ensured that the ends were burr free by spinning the drill whilst holding a piece of wet and dry over the end.  Not doing this leads to the plastic boss getting damaged and the wheel being less likely to be perpendicular to the axle.

My pillar drill doubled up as a neat wheel press.  With the brass tube inserted in the chuck, a wheel blank was laid on the base and the depression lever closed to push the tube into the boss.  Even though the tube was to the full 2mm, I used a dab of superglue as this was inserted to ensure it stayed there.  The first wheel blank was pushed approximately 10-15mm through the face, so that there was a good projection of tube beyond.  This comes in handy when the second wheel blank is added as the projecting end can be held in the drill chuck so that the process can be repeated.

And this is what you get once the second wheel blank has been pushed onto the wheel blank.  The free ends are then cut back with a piercing saw & file so that they project no more than 1/4mm.

A quick ream of the bore of the tube and the old Exactoscale axle can be inserted.  It is a nice smooth but not sloppy fit and the tube can easily slide back and forth without a trace of effort.

There is nothing radical about the vertical suspension; each axle being supported on a Bill Bedford sprung W iron.

This whizzes very nicely along my test track, including where this has reverse curves so I am hopeful it will stand upto a proper test on Portchullin over the forthcoming weekend.  If so, then I will adopt it for my future relatively short wheelbased 6 wheelers – specially where there are full footboards that restrict the movement of the any moving w-irons (of which this Microrail kit is an example).

So fingers crossed and I will report…………

← Going Dutch – Two for the Price of One!
Sliding Axles – A Reprise →