← Highland Holiday? …………… aka a Blantant Plug…………..
The Cruellest Cut – Carrying on with Hornby’s Gresley Buffet →

Whilst my memories of the former HR’s line from the 1970s and early 80’s only ever had BR mk1s as coaching stock, there were occasional strays coming onto the line in the form of Thompson/Stanier full brakes and Gresley buffet cars.  As I understand it, a pair of the latter were indeed the regulars on Glasgow to Inverness trains.  So, wishing to enliven my passenger trains up a little on Portchullin, I thought that it was time that the punters had a buffet car to buy that notorious rock hard pork pie in!

Hornby introduced a range of Gresley stock some ten years or so ago and they represented a significant step forward in terms of quality of coaching stock generally and particularly in comparison with their predecessors.  If I recall correctly there were some problems with the direction of the graining that Hornby quite quickly sorted out and the teak coaches look the part – especially as to do them oneself is a very challenging exercise.  The only vehicle that they offer in blue/grey is the buffet and this is what it looks like.

As with nearly all r-t-r models now a days, the finish is exemplary and at first glance it definitely looks the part, capturing the curves at the roof very well and it will stand out nicely in comparison with the remainder of the coaches on Portchullin.  It is true that the panelling cover beads are a bit thick, which is not visible on the teak finished coaches due to the graining but is rather more visible on the grey here but as I am going to weather down this vehicle to a fairly battered condition, I am hoping this will fade to a lessor impact.  Some commentators criticise the tumblehome being too slight and the bogies being subtly incorrect but I am struggling to see either defect so will ignore these points.

What I will not be ignoring, however, is the most significant problem with the model.  These vehicles only made it into the 1970s because they underwent a fairly significant rebuild in the 1950s.   Hornby have simply painted their LNER era model in blue/grey whereas the rebuild affected their appearance on one side quite significantly.  Here is a comparison and you can see that three windows have disappeared altogether, the panelling arrangement on the near end is different and the roof vents were adjusted to accommodate the revised internal arrangement. 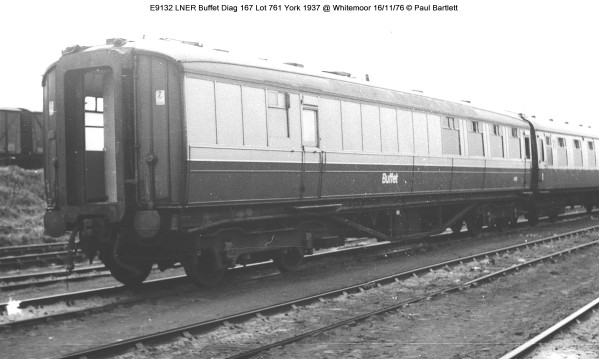 I have seen moans on the forums about this error and even moans from people at the people who are moaning.  I make no criticism of Hornby at all; it is obvious that the revised tooling that would have been necessary to correct this would have made the model uneconomic.  Therefore, we have to either accept it is as it is or pick up our tools to correct it.  I make model railways to do simply that, make them and I derive the greater proportion of my satisfaction from building or modifying things – thus I simply see this as part of the pleasure!

So my next project will be a bit of plastic surgery on an old lady, to get her looking proper!  I do not propose to do a full respray so it is not that difficult to do; so to both the moaners and the moaners at the moaners, I would simply encourage you to pick up your knives to follow suit!

Thank you to Hornby for providing the base model and also for the use of the colour photos.  The prototype photograph is courtesy of Paul Barlett.

← Highland Holiday? …………… aka a Blantant Plug…………..
The Cruellest Cut – Carrying on with Hornby’s Gresley Buffet →