A Return ticket to Buckingham – Part 1; A Running Day

For my 100th post we ought to choose an interesting topic, so it is fortunate that I recently  wangled a return invite to visit Peter Denny’s Buckingham Great Central on a journey back home from the north east!

I was accompanied on the visit by Peter Bond and although perhaps not initially intended, this turned into quite a long operating session.  Fortunately, there were several cameras on hand; so there are plenty of photographs – sufficient to split this posting into two or even three, so look out for further installments in a couple of days time!

Pete managed to blag command of Buckingham’s control panel; which is the most complicated of them – so he did regret his decision at times!  Here he is looking suitably perplexed! 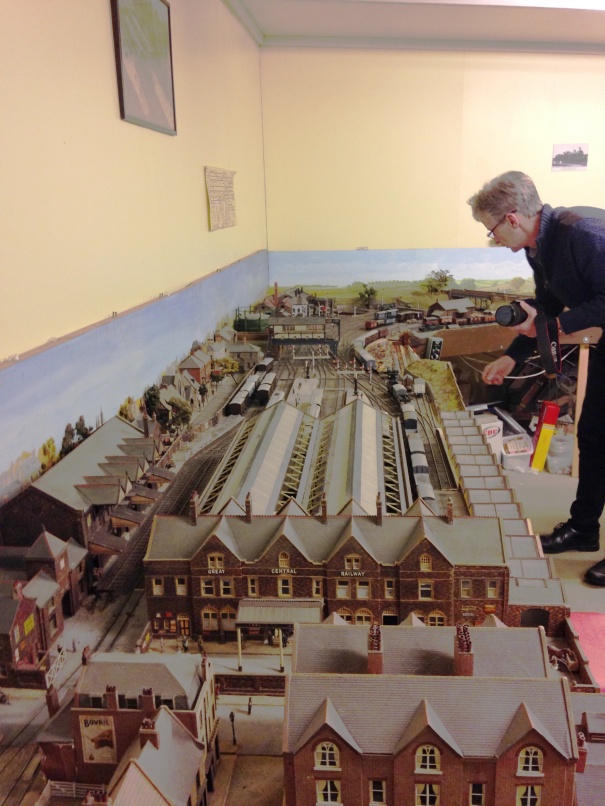 Perhaps with good reason…………..this is the control panel:

And this is the signal diagram:

All platforms have calling on arms, all lines have inner/outer homes and the platforms operate to receive and deliver!  So, there are a fair number of signals to contend with – all (well, nearly all if we are honest!) of which work and need to be complied with.  Here for example is the main home gantry………….

On this occasion, I operated Grandborough Jct, which has a less exacting timetable but even so, its control panel has a few idiosyncrasies.  It (like that to Buckingham) is entirely handbuilt including its switches so some of them need to be coaxed across, others need to be pushed firmly and a few – most of the signals – do not yet work.  There were also hand made block instruments and some signal bells to contend with. 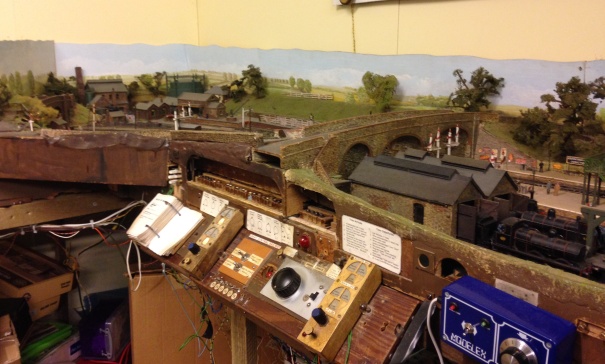 Buckingham operates to a careful conceived timetable, that plots a “day in the life” of a busy market town station, not so inconveniently located for travel to London.  There is a variety of fast and semi-fast commuter trains to London; a pair of pick up goods trains; local services services and a couple of services that come off the Leighton Buzzard branch which continue through Grandborough Jct to terminate in Buckingham, such as this one just coming to a stop at Bourton Halt and disturbing a hunt:

Even with over three hours at the regulator, we managed less than 20% of the day’s timetable; so we were going at around 120% of real time.   Peter originally had a speeded up clock to keep the pace moving (which Tony, the layout’s now owner has on the wall but does not use).  Apparently, you needed an experienced team to keep up with the clock and – just like the real thing – if you started to fall behind the whole system quickly becomes bunged up! 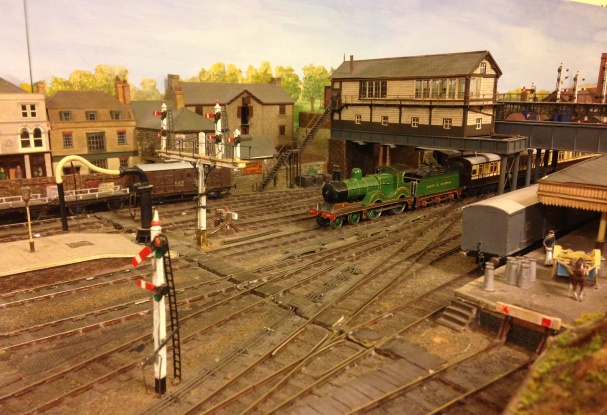 The timetable contains just over a hundred train movements.  It starts in the morning with newspaper and milk trains, getting the town ready for the day.  Then the early morning commuter trains start, along with connecting local services.  A little later, the London expresses start, timed a little faster for the city suits to use (and pay for, they are posh coaches!).  Here is one waiting for the right of way.

Once the morning rush is out of the way, a more settled period starts and the freight trains move around the layout interspersed with local passenger trains.  However, towards the end of the day the reverse happens with the returning commuters.  By the end of the evening, Buckingham is chock-a-block with trains, as you can see here: 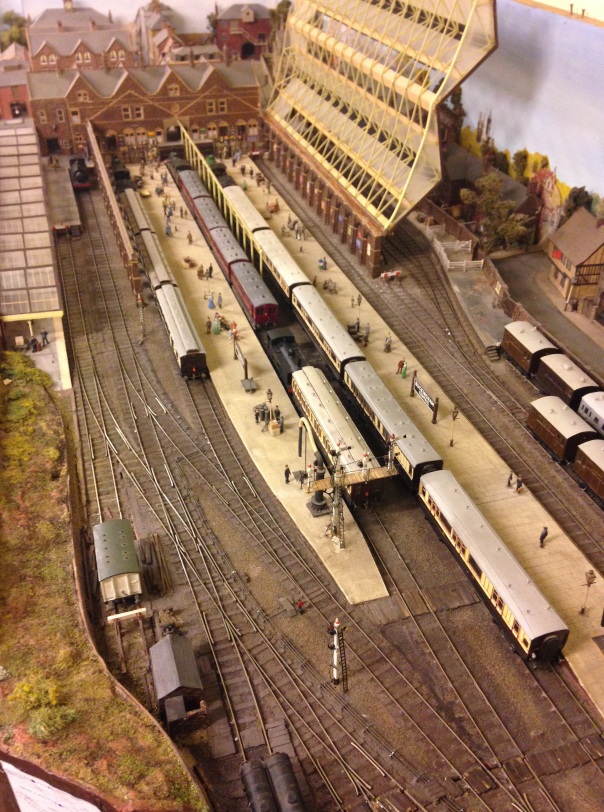 But this is not the end of the day, because all of the locos need to be released and sent to the sheds, the trains remarshalled and made ready for the next day (which was great, because Grandborough Jct had no moves so I could go and poke Pete for all the errors he was making…………).

And here are the day’s operating crew! 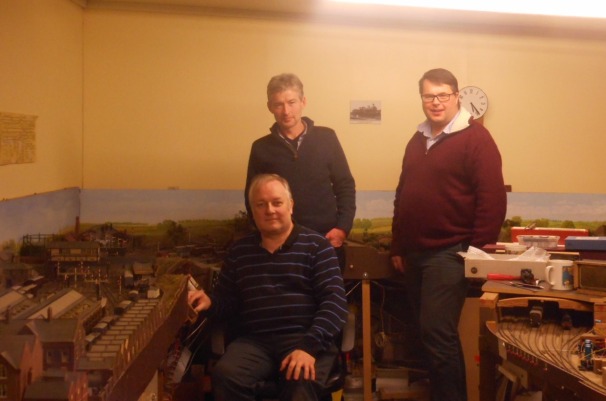 So thanks for joining me on this blog; we are a minnow by some standards with around 40,000 hits but I hope there are things in here that interest you and maybe even some sources of inspiration!