Cornish Modelling and the Demon Barber of Fleet Street

Don’t worry – this is not announcement of being turned to the dark side of modelling “Green With Rivets” (aka the GWR)!  Instead it is a reference to a week’s trip to the extreme west of Cornwall to support my wife who was appearing in a musical that was running for a week at the Minack Theatre – more of this later……

As I was expecting to have a degree of time hanging around whilst the Mrs was on stage, I took a little modelling with me – in this case, a Jones era double deck sheep van.  As can be seen in this George Washington Wilson photograph of Kyle – sheep traffic was an important source of traffic to the Highland Railway – the majority of the train in the platform are sheep vans and there is also a row of them in the foreground.

Ever with the eye to efficiency, the Highland developed a double deck van to double the number of sheep that could be transported in one vehicle.  I believe that the Cambrian Railway and several railways in Ireland had similar vehicles, but otherwise these were characteristic of the Highland’s lines to the west coast and clearly I have to have a rake of them.  Unfortunately, there is quite a lot of effort in each one………….for example each side below is made up of five layers of laminate (and they are delicate too)!!

The highland had several versions of these vans, this time I chose the second era of van, which has a single door and diagonal bracing; I do have plans for some of the other diagrams so this is a topic we will revisit at some point!   The starting point for this vehicle was an etched kit from the Lochgorm range (presently unavailable, but we are all hoping……) and as already hinted, it is not an easy one!  This is mostly due to the delicacy of the parts and the multi-layering of the etches that take up a lot of care to line up with each other.  It takes a fair few hours simply to get the sides made up and ready for assembly and then you still have the metal bracing to do!

There were a number of elements to the kit that did not work for me.  The various tabs you see in the above image are to help locate the various floors with each other but in practise they are not correctly located and just get in the way – so I whipped them off!  I also ditched the compensated suspension and instead used spring suspension instead with some trusty Bill Bedford sprung units.

However, I did not spot the biggest problem until it was too late.  There is an error with the design of the kit ends where one of them is missing the top gap between slats.  The correct end is as per the right hand picture and had I have spotted this prior to the assembly of the ends, I would have been able to insert the additional gap with a piercing saw.  Having missed the problem until after I had built the van, I decided not to sweat the parts apart to cut in the slat.  It only shows to those that know it is wrong; the problem is that I am one of them so it does niggle! 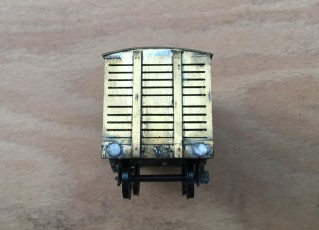 Contrary to the instructions,  I did not loose lay the floors in place and instead created a cage arrangement by hanging the floors from rods that were secured to the roof.  As can be seen below, this enables the roof and the floors to be released from the interior of the van.  As with all my vans/coaches, this is secured in place with some bolts and nuts, so that the roof can be clamped tightly in place (I hate the cracks of doom that I see on otherwise fine models where roofs are not properly secured!).  The detachable roof is necessary to both paint the vehicle but particularly populate it with the necessary sheep.  You would be startled by how many sheep are required to fill one of these – around 50 and it costs a fair amount to populate each van.  Thus, I have in mind casting some of my own in resin, although that is a story for another day.

The problems with the kit did not finish with the problems noted to date.  The iron strapping was not quite right, the springs for the axleboxes are too big and the brake lever/shoe seemed excessively skinny.  Thus, these were all adjusted or replaced with alternatives.  All this effort and problems to solve meant that the van took a great deal longer to finish than the week that I had available – so it has taken until now to photograph it.  This is what it looks like and rather dainty and different I think it is too!

And what of the Minack Theatre?  Well, for any that do not know it this theatre’s setting is simply breath-taking, being set in the cliff side only three miles short of Land’s End.  As you can see, vertigo is an issue for visitors and all of the set, props and costumes had to be carried down to the stage level – exhausting work that took us three hours!  One of other downsides of the theatre is that the seals, dolphins and basking sharks can sometimes be seen over the shoulders of the cast – which is distracting as you can imagine!

Only my wife was on stage, my duties including the stage building and front of house duties but with 7 public performances in five days, plus rehearsals there wasn’t that much time for modelling!

The musical being performed was Sweeney Todd – The Demon Barber of Fleet Street which follows the revenge that its namesake extracts on a corrupt judge and his beadle (with quite significant amounts of collateral!) for wrongly arranging for him to be transported.  The most recent Hollywood version is pretty dark and definitely less watchable as a result – our version has just as death but with a great deal of humour too; especially as the leads had some pretty good comic timing to deliver it well.

The by-product of all these killings (ie bodies!) found its way into pies and one of the more jolly parts of the performance is where all the customers of these pies extol the virtues of their meaty dishes.  So with apologies for my rather crude phone videoing; enjoy……………(I did, although strangely I had no taste for pasties whilst I was down in Cornwall!)………..