After the painting disaster, I have been working on the latest version of the Fox Bogies.  The prototype utilised a patented design with pressed steel plates to form the sides and ends which produced a stiff and resilient frame, better than the other contemporary options.   Thus these bogies were very common amongst the pre-grouping companies with most of using them to at least some degree.

Although there are several model manufacturers that produce Fox bogies, there are no versions that use springing which I now prefer.  As they were the primary form of bogie used by the Highland Railway, I need a few of them and thus I have been putting some effort into getting a top notch solution.  In this regard, I have been assisted greatly by Justin Newitt if Rumney Models whose design of sprung bogie has formed the basis of this.

The model has primary suspension on the pin points based on guitar wire springs,

In addition to this, the design has a sprung bolster, also based on a guitar string suspension. 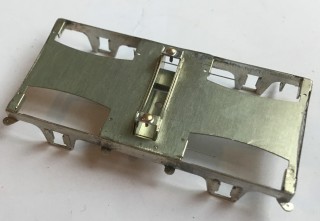 The castings I have used on these are from Lochgorm Models and the design has been conceived to enable these to be used either retaining their dampers (the cylindrical appendage at the end of the leaf springs) or with replacements  that are a little more defined.

The etch is also designed to be provided with full stepboards as below or with only a short section to one end – as they typically were converted to during their life.

There is full brake gear provided, with a little trick where they do not pass under the axle (remember this view is upside down!) – this enables the wheel to be removed if this is required.

This is not the first version of these (don’t accuse me of not test building my designs!) and they are very close to done.  The final change is to adjust the primary spring hangers slightly so that they are not visible when they are depressed (you can just see it poking above the sides in line with the axlebox),  The advantage of computer drawn artwork is that things like this can be changed relatively easily.

These, and indeed the rest of the dia 51 full brake, will be made available for sale quite soon.

Previous parts to the test build can be found here: