Most years I attend the Missenden Railway Modellers Spring Weekend and have just returned from this year’s.  The weekends have some 70 or so railway modellers congregating for a residential retreat to both learn some new skills, enjoy the company and get some quality modelling time in.  The participants split between different groups depending what they wish to do; trackwork, weathering, painting/lining, DCC sound control, backscenes and, in my case, loco building.

In my case I started a new loco (of course…..), but not a Highland one.  This is a North Eastern 2-4-0 “Tennant” produced by Arthur Kimber.  I am building this for Tim & Julian for them to use on their layout, Benfieldside.  Thus it is going to be in EM, but I am going to put in clearances sufficent to convert it on to P4 if this ever takes my fancy, and it will be in NER green – so it should look rather fine.  Indeed, it should look a bit like this (:only hopefully at a higher resolution!): 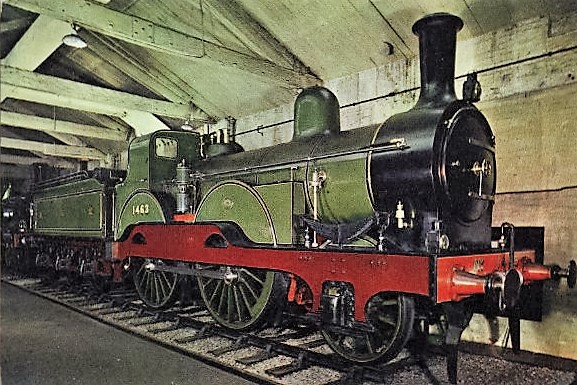 Slightly annoyingly, the kit was conceived to be built to P4, so instead of converting OO/EM kits to P4, I am converting a P4 kit to EM!!   However, at least it is all the same skills and cutting bits off to make them narrower, is easier than splicing them in!  One small departure has been to use some Markits wheels to act as some test track dummies for the build.  The idea is that they are capable of being taken on and off without damage, are not steel (so are not going to corrode) and also that they automatically quarter themselves.  This is they in the largely completed chassis (which is a rolling chassis, even if I have not yet fitted a motor).  Also of note is the valve gear (dummy, life is not long enogh to making working inside gear – and nor am I a good enough modeller!).  At present the slide bars and pistons are not yet fitted.

Unlike Highland locos, the running plate and valancing has high swept up sections and really nice flowing curves.  This took quite a lot of care to form and I found it necessary to clamp both the front and rear in place initially, after the shape had been bent.  Once, however, one end was soldered in place, the second end need to be released so that the thermal expansion did not distort the running plate.

There are more of these sweeping curves to the cab, which also give rise to some tense moments as it is formed.  So long as the folds are made at the right locations and around a former the curves formed quite well.  When this is added to the running plate, it starts to look like a locomotive.

The boiler comes pre-rolled, with all of the cuts for the wheels and holes already formed.  The smokebox is a seperate part that is secured onto the boiler by a bolt and nut.  This is quite effective and may well be something that I mimic in the future.  The boiler does not come with boiler bands, so I will have some fun putting these on.  It also appears to be about 1/2mm too long, so some cutting and filing is going to occur.

This is what it looks like with the boiler plonked on it (as I said, it is a bit too long so is not sitting down properly – however, it does look good and very different from anything the Highland had! 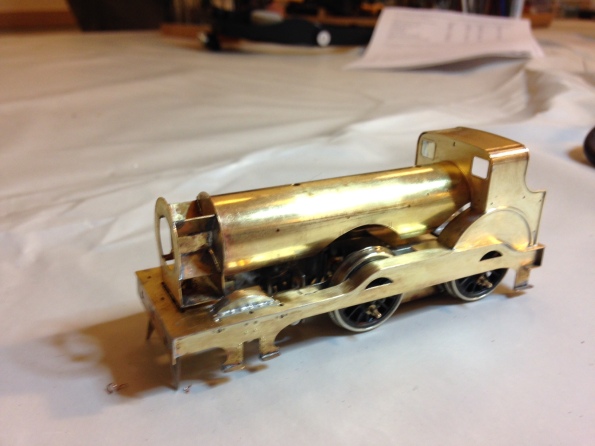 Sorry if it looks a bit silly on its reduced size wheels!  This will get explained and corrected nearer the end of the build.